The Girl In The Spider’s Web by David Lagercrantz

I loved Steig Larsson’s Girl with the Dragon Tattoo series with Lisbeth Salander as the incredibly broken but strong and smart heroine. When the dust finally settled after Larsson’s sudden death and a new writer was chosen to continue the series, I was skeptical.  It is an incredibly risky and tricky thing to ask another writer to take on another author’s vision, tone and style. But recently I broke down and read the first book by Lagercrantz and was pleasantly surprised. 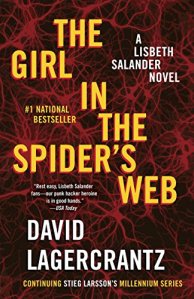 Salander is on a mission to find her father, a Russian mobster and all around brutal misogynist, who tormented Salander, her mother sister. To follow his trail she penetrates the super secret computers at the headquarters of the NSA in Fort Meade Maryland, setting off alarms in the farthest reaches of the US government.

Meanwhile, Mikael Blomkvist is trying to save Millennium, the news magazine that he began. In spite of the magazine’s award winning journalism, it is now struggling financially and the new owner wants to change the focus towards fluffy celebrity focused stories rather than the hard hitting journalism that Blomkvist has staked his career on. One evening while he is mulling over what to do, Blomkvist gets a call from a reclusive scientist who is concerned that his artificial technology has fallen into the wrong hands. He asks Blomkvist to come to his home so they can talk, but before Blomkvist  can speak to him the scientist is killed by an intruder right in front of his autistic and disabled son.

Intrigued by his conversation, Blomkvist begins investigating and realizes that the scientist had been in contact with Salander and in fact it was she who had concluded that the scientist had been hacked and his AI technology stolen. Soon Blomkvist and Salander are working together to save the scientist’s autistic son and to protect the technology from falling in to the wrong hands. With the US government trying to track the hacker who breached their system and a beautiful but deadly woman getting in their way, Salander and Blomkvist must evade and distract as they try to untangle this deadly web of violence, corruption and deceit.

Lagercrantz does a fine job of carrying on the legacy of  Larsson. He has treated the main characters with care and respect maintaining their integrity while allowing them to grow and develop. Although I missed the soulfulness of Larsson, Lagercrantz has the potential to grow into his own voice and may, in the future, be able to offer a depth of his own. I look forward to reading Lagercrantz and his vision for this unique series.

Recommend this book to: Marian and Sharon

This site uses Akismet to reduce spam. Learn how your comment data is processed.