Once Upon A River by Diane Setterfield 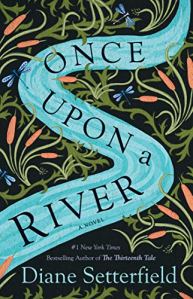 It is a dark winter’s night. All the locals are gathered at the old inn telling stories, and exchanging news, when suddenly the door swings open letting in the cold wind and rain. A stranger stands in the doorway holding a small, beautiful child in his arms. The child appears dead and her body is taken to another room, while the man who brought her in is attended to by the local wise woman. The man says he found the child in the Thames, rescued her, and brought her to the inn. It is not his child, nor does he know to whom the child might belong. The wise woman after finishing with the man, checks in again on the child and this time she finds a a very slow pulse and then the girl takes a breath and she lives.

The villagers are stunned. Was it a miracle or magic? Who is this child that landed on the doorstep of their village? Soon three families step forward to claim the child. A young mother who lost their daughter to the river two years before is convinced that this girl is their child, although her husband is not quite so sure.  Another family from a neighboring town have just heard that their son had a liaison with a local girl but refused to marry her even though she was pregnant. Believing the child is their son’s they are willing to take her into their family. And finally a local woman is convinced that this young child is her sister.

The child regains her strength but never speaks. She seems to be intelligent, and can hear and seems to understand when spoken too, but is mute, disengaged and solitary and the mystery around her deepens. The villagers are intrigued and speculate on who her family might be and where she might have come from. As time passes secrets are revealed, plots are exposed, and a heinous crime subverted but only just in the nick of time, leaving behind a story that the locals will tell at the inn for many years to come.

Setterfield has written one of the most atmospheric, profound and entrancing book I have read in a long time. From the moment the man stands in the doorway of the inn you are hooked and are completely in her power as she gently guides you through the eddies and currents of her tale. Carefully plotted, full of nuance and empathy, this story of a lost and found child will tug at your heart and reaffirm your faith in the basic goodness of people.

Recommend this book to: Keith, Sharon, Marian and Lauren

This site uses Akismet to reduce spam. Learn how your comment data is processed.